Data from the Delaware Environmental Observing System (DEOS) show that summer temperature anomalies varied between positive and negative, depending upon location within Delaware and Chester County, PA (Figure 3). The Wilmington/New Castle County Airport recorded 16 days of temperatures greater than or equal to 90°F, very near the 1948 – 2017 normal of 17 days.

Summer precipitation was above normal across the entire State (Figure 4). However, the size of the positive anomalies varied greatly from one location to another. The variable pattern of precipitation is due to the small-scale nature of convective storms; dropping heavy precipitation in some areas, while leaving others relatively dry. 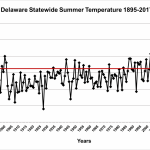 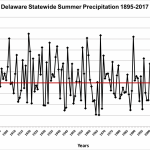 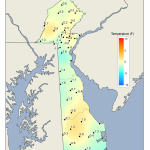 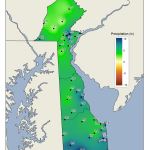