Center (NCDC) indicates that spring (MAM) of 2012 was the warmest across Delaware since records began in 1895.

The last three spring seasons have all ranked in the top five warmest springs since records began.

Although the final data may change the rankings slightly, it is clear that spring 2012 was unusually warm and dry across the First State. 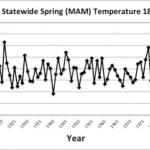 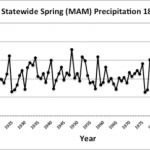