The January through June 2012 mean temperature of 55.0 degrees Fahrenheit was greater than five degrees above the 1895-2011 average (Figure 1).

Although the final data may change the rankings slightly, it is clear that January

through June of 2012 was unusually warm and dry across the First State.

High evapotranspiration rates (evaporation from the surface and transpiration from vegetation) associated with the warm temperatures, combined with record low precipitation, have produced very dry conditions across much of the State (Figure 3). In fact, nearly 82% of the state is currently experiencing abnormally dry conditions, while nearly one-third is considered to be severely dry (much and Kent and Sussex Counties). 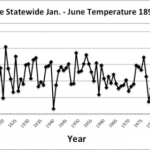 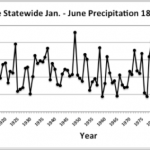 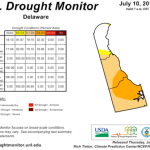