Skip to content
Posted on September 7, 2012 | by Dan Leathers

Preliminary data from the National Climatic Data Center indicates that the summer (JJA) of 2012 was the 3rd warmest across Delaware since records began in 1895.

The June through August 2012 mean temperature of 76.9 degrees Fahrenheit was nearly three degrees above the 1895-2012 average (Figure 1).

The last three summer seasons have ranked as the three warmest summers since records began, with 2010 being the warmest, 2011 the second warmest and this year the third warmest on record.

Although the final data may change the rankings slightly, it is clear that summer 2012 was unusually warm and dry across the First State. 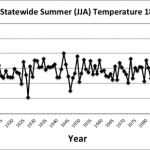 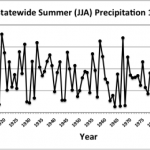