Below normal temperatures and below normal rainfall characterized Delaware’s Climate during spring 2013.

Cool temperatures were accompanied by dry conditions across the state during the spring season. The statewide mean precipitation of 9.57” was 2.41” below the 1981-2010 normal of 11.98”, and was the 4th year in a row with below normal spring precipitation (Figure 2). Although below normal, spring 2013 precipitation was more than 5” greater than that of 2012, which holds the distinction of being the driest spring on record.

Data from the Delaware Environmental Observing System (DEOS) show that a majority of stations across Delaware experienced below average temperatures during the spring season with the largest anomalies found along the Atlantic coast in Sussex County (nearly 5° F below normal). Pockets of above normal temperature anomalies were found in northern Sussex and southern Kent Counties and in parts of Chester County, PA. (Figure 3).

All stations in the DEOS network recorded below normal precipitation values during spring 2013, except for Selbyville, DE. The largest precipitation deficits were generally found across northern New Castle County, DE and Chester County, PA (Figure 4). 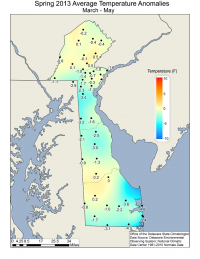 Figure 3. Spring 2013 average temperature departures from the 1981-2010 mean based upon DEOS station data. 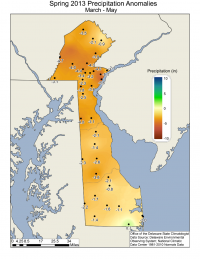 Figure 4. Spring 2013 precipitation departures from the 1981-2010 mean based upon DEOS station data