Three early season snowfall events propelled December 2013 into 4th place on the list of all-time snowiest Decembers for the Wilmington area with 11.9” of snow. This was more than 8.0” above the December normal of 3.5”.

A surprise snowfall associated with heavy bands of precipitation moved through the region on Sunday, December 8th, dropping 8.5” of snow at the Wilmington/New Castle County Airport. This was followed by another fast moving system on Tuesday the 10th that dropped another 2.9” of snow in the Wilmington area. Another 0.5” of snow fell on Saturday the 14th before precipitation changed to freezing rain and rain. The second half of the month was snow free except for some trace amounts. 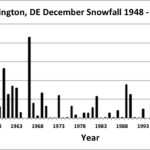 Figure 1. December Snowfall Totals at the Wilmington/New Castle County Airport for the period 1948—2013. Note that data were measured at Porter Reservoir from 1996 through 1999.