Preliminary data indicates that the statewide average temperature in April was 53.4°F according to preliminary data from the National Climatic Data Center. This is 0.1°F below the 1981-2010 normal of 53.5°F (Figure 1). Through April, each month in 2014 has seen below normal temperatures across Delaware.

Data from the Delaware Environmental Observing System (DEOS) shows that the mean April temperature anomalies across Delaware were generally below normal, with the greatest negative departures found in coastal Sussex County (Figure 3).

Precipitation varied greatly across the state with dry conditions covering most of Kent and Sussex counties, while much above normal precipitation fell across New Castle County and Chester County, PA (Figure 4). Most of the rain in northern areas fell in one major event on April 30th. 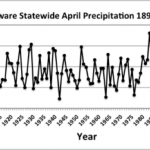 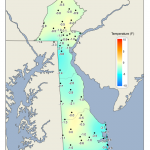 Figure 3. April 2014 average temperature departures from the 1981-2010 mean based upon DEOS station data. 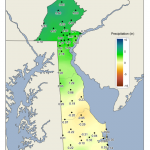