Data from the Delaware Environmental Observing System (DEOS) show that temperature departures were positive at most stations, with the largest positive anomalies found across New Castle County (Figure 3).  Precipitation was below normal at nearly all stations throughout the State with the largest negative anomalies found across eastern Kent County (Figure 4).

Temperatures were generally below normal across the central portion  of the United States, and warmer than normal along both the Pacific and north-Atlantic coasts (Figure 5).  Precipitation anomalies varied greatly across the country with particularly dry conditions across most of the western half of the United States.  The Gulf Coast, from Louisiana east to Florida, saw much above normal precipitation (Figure 6).  The 500 hPa height pattern for April shows a jet stream ridge across the Pacific Coast and a weak jet stream trough across the central and eastern portions of the country (Figure 7), contributing to the overall temperature pattern. 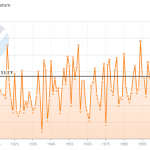 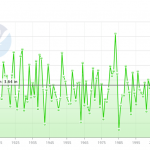 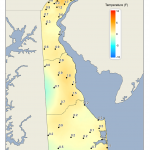 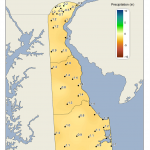 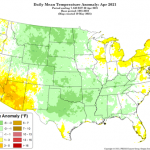 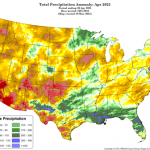 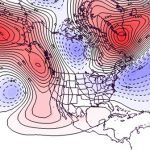