Preliminary data indicates that the statewide average temperature in May was 65.1°F; this was 2.4°F above the 1981-2010 normal of 62.7°F (Figure 1). May is the first month in 2014 to see above average temperatures across Delaware. Mean maximum and minimum temperatures contributed equally to the above normal conditions during the month.

Precipitation varied greatly across the State as is often the case during the warm season when convective rainfall makes up the bulk of precipitation. Precipitation totals ranged from under two inches to as much as five inches with the southern portion of Delaware generally seeing the lowest amounts (Figure 4). 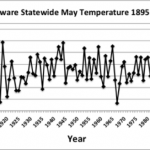 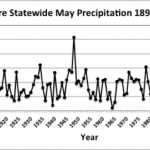 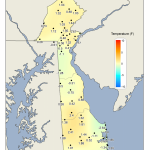 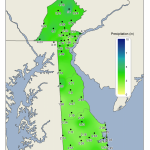 Figure 4. May 2014 total precipitation based upon DEOS station data.