Preliminary data indicates that the statewide average temperature in July was 76.0°F, 0.6°F below the 1981-2010 normal of 76.6°F (Figure 1) and the coolest July since 2009. Maximum and minimum temperatures contributed equally to the below normal conditions during the month.

Delaware’s statewide precipitation for July 2014 averaged 5.34 inches, 1.20 inches above the 1981-2010 mean (Figure 2). Although significantly above normal, rainfall this July was still less than last year when an average of 6.56 inches fell across the state.

Data from the Delaware Environmental Observing System (DEOS) shows that the mean July temperatures across Delaware were consistently below normal across the entire state. No DEOS station experienced above normal temperatures during the month. (Figure 3).

Likewise, rainfall totals were consistently above normal across Delaware and Chester County, PA, with some of the largest precipitation anomalies found in Sussex County, DE, where precipitation had been below normal in June (Figure 4). 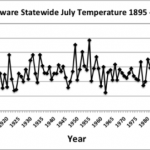 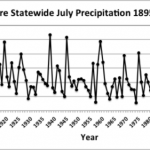 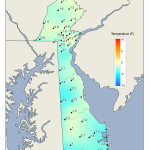 Figure 3. July 2014 average temperature departures from the 1981-2010 mean based upon DEOS station data. 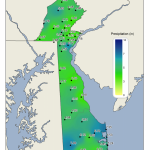