Preliminary data indicates that the statewide average temperature in December was 41.7°F, which is 3.6°F above the 1981-2010 normal of 38.1°F (Figure 1). In addition, December 2014 is the fourth December in a row with above normal temperatures. December 2014 is tied with December 1972 as the 14th warmest since records began in 1895, and falls 107th on NCDC’s 120 year ranking from coldest to hottest Decembers. [More information on NCDC’s Climatological Ranking can be found here.]

Delaware’s preliminary statewide precipitation total for December 2014 averaged 3.66 inches, which is 0.09 inches above the 1981-2010 mean (Figure 2). Thus, precipitation during the month of December was very close to normal.

All stations across the Delaware Environmental Observing System (DEOS) network experienced higher than normal temperatures during December (Figure 3). Temperature anomalies were greatest in northern Delaware and in Chester County, PA, where some stations had positive anomalies greater than 4.0°F.

Precipitation generally increased from south to north across the region ranging from 5 inches in coastal Sussex County to less than three inches in portions of northern Delaware and Chester County, PA (Figure 4). 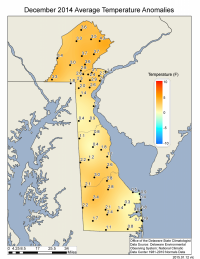 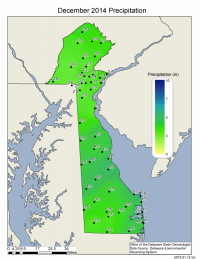