Residents will long remember the week of February 15th through February 21, 2015 as a true taste of winter across Delaware.

During the week there were two separate outbreaks of brutally cold air accompanied by strong winds. These outbreaks led to new record low temperatures in some portions of the State, and dangerous wind chill values. 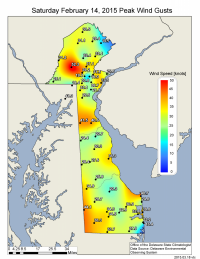 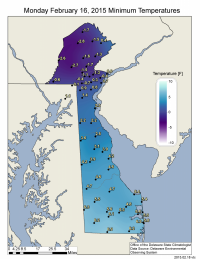 The first cold outbreak followed a cold frontal passage on the evening of February 14th. The cold front ushered in extremely cold air and high winds across the State during the early morning hours of Sunday February 15th. Wind chill readings during the morning of the 15th were well below 0°F across the entire state, with values ranging from -24°F in Chester County, PA to -3.2°F along the Atlantic Coast of Delaware (Figure 1). Winds gusted to over 40 mph in many locations, contributing to the extreme wind chill values (Figure 2). As winds decreased during the early morning hours of Monday February 16th, temperatures were able to drop to record or near record levels at many locations across the State (Figure 3). 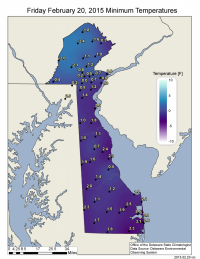 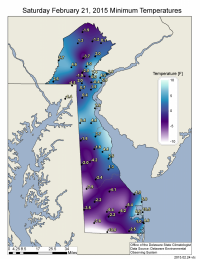 A second cold front moved through the State during the evening hours of Wednesday February 18th. This push of frigid air, and high winds resulted in extreme wind chills during the day on Thursday the 19th and Friday the 20th. Morning lows on the 20th again reached record levels at most locations across Delaware and Chester County, PA (Figure 4). The cold air hung on for one more day, especially across southern Delaware where temperatures dropped to record levels and reached as low as -10°F in Gumboro, DE on the morning of February 21st (Figure 5). 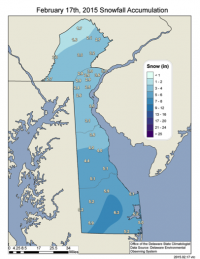 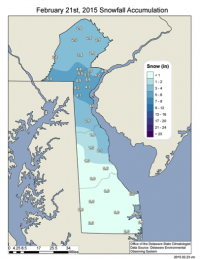 The first significant snowfall of the season for much of the State occurred on February 17th. With cold air in place across Delaware, a storm system moved across the southeastern United States, exiting the coast near the Virginia/North Carolina border. With the storm taking a southerly track, snowfall totals across Delaware were highest in Sussex County where over 6 inches of snow fell in some areas (Figure 6). The northern half of Delaware saw snow totals in the 2 to 4 inch range. A second storm impacted the State on Saturday the 21st, dropping more than 5 inches of snow in parts of New Castle County and Chester County, PA (Figure 7).