Preliminary data indicates that the statewide average temperature in March was 39.9°F, 4.1°F below the 1981-2010 normal of 44.0°F (Figure 1). March 2015 was the third year in a row with significantly below normal temperatures during the month, and the 28th coldest March since records began in 1895.

All stations across the Delaware Environmental Observing System (DEOS) network experienced much lower than normal temperatures during March 2015 (Figure 4). Mean monthly temperatures were generally 3°F to 6°F below normal across the entire State. 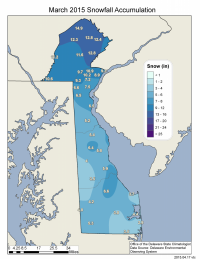 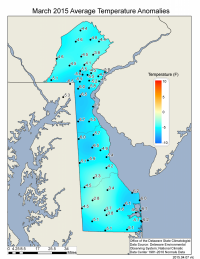 Figure 4. March 2015 average temperature anomalies from the 1981-2010 mean based upon DEOS station data. 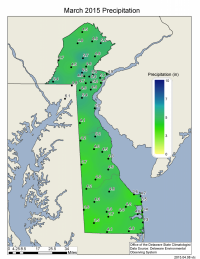