Delaware’s statewide precipitation for July 2015 averaged 3.90 inches, just 0.24 inches below the 1981-2010 mean (Figure 2). July’s near normal precipitation followed a very wet June that ranked as the fourth wettest June since records began in 1895.

Temperatures were near normal across most of the State while the sign and size of anomalies varied from one location to another (Figure 3). Precipitation was below normal across most of Delaware and Chester County, PA except for southern Sussex County and in the Lewes, DE area where strong thunderstorms added to the monthly totals (Figure 4). 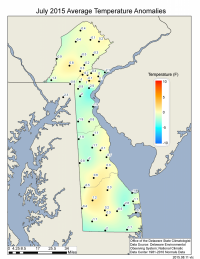 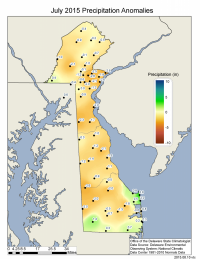