Preliminary data indicates that summer temperatures were just above the 30-year “normal” during 2015. The statewide mean summer temperature of 75.1°F was 0.6°F above the 1981-2010 mean value of 74.5°F (Figure 1). Monthly temperatures during the season were all above normal, with June recording the largest departure of 1.4°F.

The statewide mean precipitation of 15.17 inches was 3.17 inches above the 1981-2010 normal of 12.0 inches, and was the 3rd year in a row with above normal Summer rainfall (Figure 2). Heavy rainfall across the State during June (9.03 inches) accounted for the seasonal departure, as both July and August saw below normal precipitation.

Data from the Delaware Environmental Observing System (DEOS) show that temperature anomalies across the State varied during the Summer season depending upon location (Figure 3).

Rainfall was above normal across much of the State, except for portions of Kent and Sussex counties where negative precipitation departures of up to 3.0 inches were found (Figure 4). The fact that much of our summer precipitation falls in showers and thunderstorms can cause large spatial variations in precipitation during the summer season. 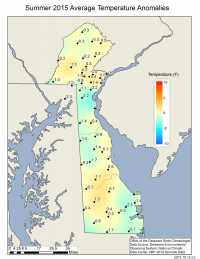 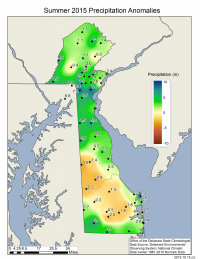