Preliminary data indicates that the statewide average temperature in May was 61.8°F; this was 0.9°F below the 1981-2010 normal of 62.7°F (Figure 1). May was the second consecutive month to see below normal temperatures across the First State. Strong El Nino events, like we saw this winter, are often followed by cool spring temperatures across Delaware.

Data from the Delaware Environmental Observing System (DEOS) shows that temperatures were below normal across the entire State, with the coolest temperatures (compared to normal) found across Sussex County, DE (Figure 3). Precipitation was significantly above normal across all of Delaware, with near normal precipitation amounts falling in Chester County, PA (Figure 4). 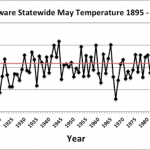 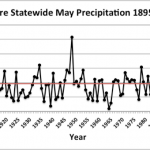 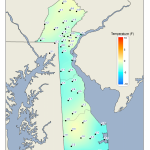 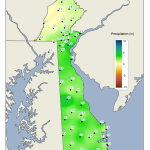