Delaware’s statewide precipitation for July 2016 averaged 4.92 inches, 0.78 inches above the 1981-2010 mean of 4.14 inches (Figure 2). Precipitation amounts varied widely across the State as convective storms hit some areas, but missed others.

Data from the Delaware Environmental Observing System (DEOS) show that temperatures were above normal across the entire State, with the largest temperature anomalies found across northern Sussex and southern Kent counties (Figure 3). Precipitation varied significantly across the First State, with the largest positive anomaly found in the Seaford area (Figure 4). Much of the heavy precipitation in the southwestern portion of the State occurred during a strong thunderstorm on July 13th when over 5.0 inches of rain fell in many locations. 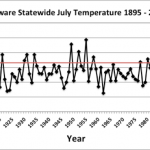 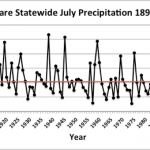 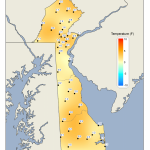 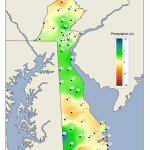