Preliminary data indicates that the statewide average temperature in September was 72.3°F, 4.3°F above the 1981-2010 normal of 68.0°F (Figure 1). September 2016 ranks as the 3rd warmest September since records began in 1895. September’s extreme warmth follows the warmest August, and the 5th warmest July on record. The Wilmington/New Castle County Airport recorded 6 days with temperatures greater than or equal to 90°F during the month, 4 days more than the long-term mean.

Delaware’s statewide precipitation for September 2016 averaged 8.18 inches, 4.21 inches above the 1981-2010 mean of 3.97 inches (Figure 2). The large September total for the State was primarily a result of extreme rainfall that fell on September 29th, especially in the southern portions of the State. During this event, portions of eastern Sussex County received more than 12” of precipitation, with over 4” falling in a one-hour period in Harbeson, DE.

Data from the Delaware Environmental Observing System (DEOS) show that temperatures were above normal at nearly every station across the State, with the largest temperature anomalies found across northern New Castle County, and Chester County, PA (Figure 3). Precipitation was far above average across most of Sussex and Kent counties, with several stations posting anomalies of greater than 10 inches for the month (Figure 4). 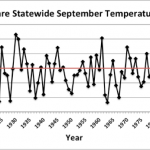 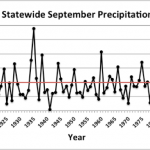 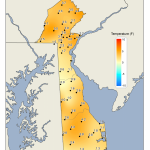 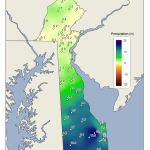 Figure 4. September 2016 precipitation departures (inches) from the 1981-2010 mean based upon DEOS station data.