Preliminary data indicates that the statewide average temperature in October was 60.0°F, 2.9°F above the 1981-2010 normal of 57.1°F (Figure 1). October 2016 ranks as the 12th warmest October since records began in 1895. October was the fourth month in a row with temperatures appreciably above normal.

Delaware’s statewide precipitation for October 2016 averaged 3.02 inches, 0.44 inches below the 1981-2010 mean of 3.46 inches (Figure 2). Precipitation amounts varied greatly, with dry conditions across northern Delaware and wetter conditions in the southern portion of the State.

Data from the Delaware Environmental Observing System (DEOS) shows that temperatures were above normal across the entire State, with the largest temperature anomalies found across Chester County, PA and inland Sussex County (Figure 3). Much below normal rainfall was the rule across northern New Castle County, and Chester County, PA, while precipitation was generally above normal across Sussex County (Figure 4). 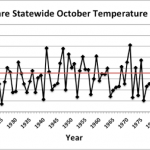 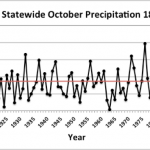 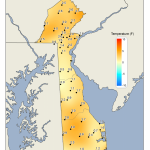 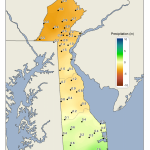 Figure 4. October 2016 precipitation departures (inches) from the 1981-2010 mean based upon DEOS station data.