Delaware’s statewide precipitation for March 2017 averaged 4.43 inches, 0.23 inches above the 1981-2010 mean (Figure 2). March 2017 was the first month since September 2016 with above normal precipitation across the First State. A late season winter-weather event brought up to 4 inches of snow and sleet to northern sections of New Castle County on the 13th and 14th.

Data from the Delaware Environmental Observing System (DEOS) shows that temperatures varied across the State during the month, with most stations recording below normal mean monthly values (Figure 3). Total liquid precipitation was near normal across most of Delaware, with the driest conditions found across Chester County Pennsylvania (Figure 4). 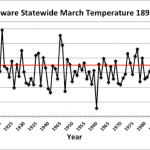 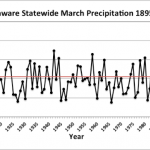 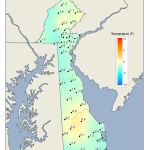 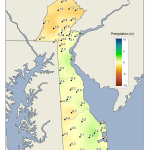