Delaware’s statewide precipitation for May 2017 averaged 5.92 inches, 2.06 inches above the 1981-2010 mean (Figure 2). May 2017 was only the second of the last eight months with above normal precipitation across the First State.

Data from the Delaware Environmental Observing System (DEOS) shows that temperatures varied greatly across the State, with large, negative temperature anomalies found in western New Castle and northern Kent Counties (Figure 3). Precipitation was above average at all sites statewide, with the largest positive anomalies across central Delaware (Figure 4). 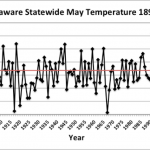 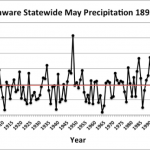 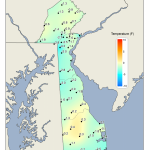 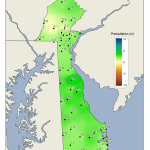