Skip to content
Posted on September 7, 2017 | by Dan Leathers

Preliminary data indicates that the statewide average temperature in August was 74.2°F; this was 0.7°F below the 1981-2010 normal of 74.9°F (Figure 1). August 2017 was the first month of the summer season to register below normal temperatures.

Data from the Delaware Environmental Observing System (DEOS) show that temperatures were below normal across the entire State with many of the largest negative temperature departures found across the northern portion of the region (Figure 3). The largest precipitation departures were found primarily across southern and central Delaware, where some DEOS stations recorded rainfall that was more than 5 inches above normal for the month (Figure 4). 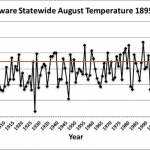 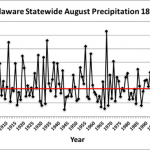 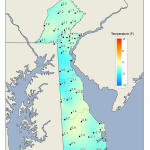 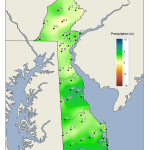