The United States, east of the Mississippi River, experienced one of its warmest Februaries on record in 2018 with some locations in the southeast seeing temperatures 10°F to 12°F above normal (Figure 1). For Delaware, preliminary data indicates that the statewide average temperature in February was 42.9°F, which is 6.4°F above the 1981-2010 mean value of 36.5°F (Figure 2). This made February 2018 the second warmest on record since 1895. Only February of last year (2017) has been warmer.

Delaware’s statewide precipitation for February 2018 of 4.98 inches was the 12th wettest since records began in 1895 (Figure 3). This February’s precipitation total was 2.07 inches above average for the month. The warm temperatures kept snowfall totals low in the Wilmington area, with only 2.5 inches of snow recorded at the Wilmington – New Castle County Airport, compared to the average value of 6.8 inches.

Data from the Delaware Environmental Observing System (DEOS) show that temperature departures were above normal across the entire State (Figure 4), with the largest anomalies in found in Sussex County. Precipitation anomalies were above normal across the majority of the State (Figure 5), with some stations reaching departures of approximately 5 inches in Kent and New Castle Counties. Only extreme southeastern Delaware saw below normal precipitation during the month. 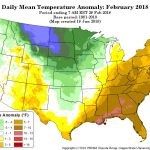 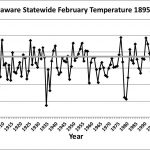 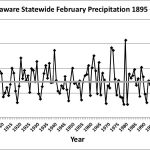 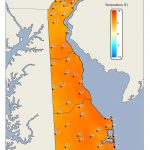 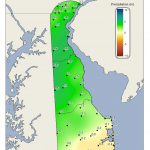 Figure 5. February 2018 precipitation departures (inches) from the 1981-2010 mean based upon DEOS station data.