Preliminary data indicates that the statewide average temperature in April was 51.1°F, which is 2.4°F below the 1981-2010 mean value of 53.5°F (Figure 1). April 2018 was the 39th coolest April since 1895 and was 8.4°F below temperatures during April 2017. The cool conditions across Delaware were consistent with temperature anomalies across the eastern two-thirds of the United States where temperatures were similarly below normal (Figure 2).

Data from the Delaware Environmental Observing System (DEOS) show that temperature departures were below normal across the entire State (Figure 4), with anomalies as much as 4o F below the average at some stations. Precipitation was generally below normal across the State except for a few stations in central Sussex and southern Kent Counties (Figure 5). Most stations saw precipitation departures of one inch or less. 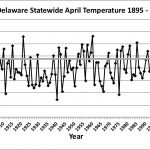 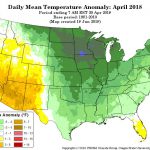 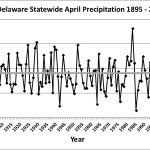 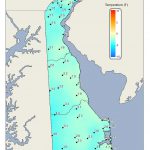 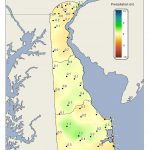