Preliminary data indicates that the statewide average temperature in June was 72.7°F, which is 0.6°F above the 1981-2010 mean value of 72.1°F (Figure 1). June 2018 was the 26th warmest June since 1895. While a large majority of the United States saw significantly above normal temperatures for June (Figure 2), Delaware’s temperatures were more consistent with temperature anomalies found across the mid-Atlantic and New England.

Data from the Delaware Environmental Observing System (DEOS)
show that temperature (Figure 4) departures were generally small and varied between positive and negative values across the State. This pattern of departures is expected for a month with near normal
temperature conditions. Precipitation departures also varied greatly from one location to another (Figure 5). This is due to the “convective nature” of the precipitation during the summer months, with most falling in thunderstorms that cover only a small area. 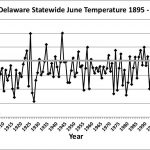 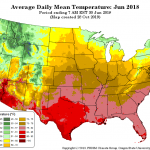 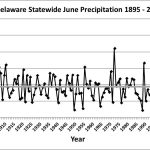 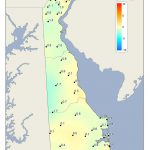 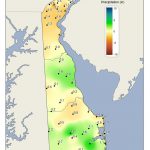