Preliminary data indicates that the statewide average temperature in July was 77.3°F, which is 0.7°F above the 1981-2010 mean value of 76.6°F (Figure 1). July 2018 ranked in the top one-third for temperatures since 1895. During the month, 10 days at or above 90°F were recorded at the Wilmington/New Castle County Airport, approximately one more than average. Larger positive temperature anomalies were found across the rest of the northeast United States, and across most of the western and southwestern portions of the country (Figure 2).

Delaware’s statewide precipitation for July 2018 averaged 5.68 inches, 1.54 inches above the 1981-2010 mean (Figure 3), placing this month in the wettest one-third of Julys since 1895. Although statewide totals for July were above normal, the month actually began very dry across most of the state, with approximately 80% of the month’s precipitation falling after July 20th.

Data from the Delaware Environmental Observing System (DEOS) show that temperature (Figure 4) departures were generally small and varied between positive and negative values across the State during July. Precipitation departures also varied greatly from one location to another (Figure 5), but were generally positive contributing to the wet conditions statewide. Some locations saw precipitation anomalies more than four inches above normal. 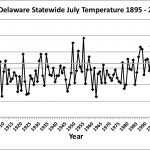 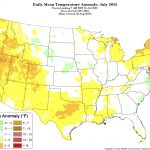 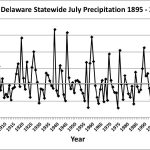 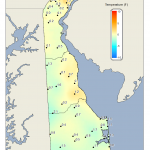 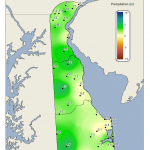