Skip to content
Posted on September 7, 2018 | by Dan Leathers

Preliminary data indicates that the statewide average temperature in August was 78.6°F, which is 3.73°F above the 1981-2010 mean value of 74.9°F (Figure 1). August 2018 is tied with August 2016 as the warmest August since records for the State began in 1895. Similar positive temperature anomalies were found across the rest of the northeast United States, and across most of the western and southwestern portions of the country (Figure 2).

Delaware’s statewide precipitation for August 2018 averaged 4.35inches, 0.22 inches above the 1981-2010 mean (Figure 3). Although statewide totals for August were just above normal, rainfall in southern Delaware was far below normal, while rainfall in the northern portion of the State was far above normal.

Data from the Delaware Environmental Observing System (DEOS) show that temperature (Figure 4) departures were quite large and uniformly positive during August throughout the State. Precipitation departures varied greatly between northern and southern Delaware (Figure 5). Rainfall deficits as large as 4 inches were found in Sussex County, while many locations in northern New Castle County had rainfall surpluses of greater than 5 inches! 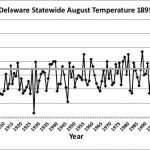 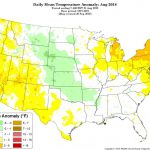 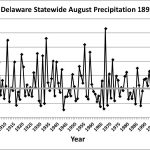 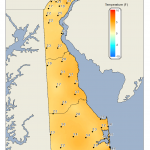 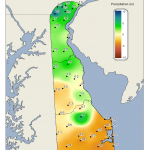