Skip to content
Posted on February 7, 2019 | by Dan Leathers

Preliminary data indicates that the statewide average temperature in January was 34.6°F, which is 0.5°F above the 1981-2010 mean value of 34.1°F (Figure 1). Delaware’s January temperatures were considered “normal” for the month in comparison to all data going back to 1895, not falling within the bottom or top one-third of January values in the last 125 years.

Delaware’s statewide precipitation for January 2019 averaged 3.45 inches, 0.13 inches above the 1981-2010 mean (Figure 2). Snowfall was slightly below normal during the month in northern Delaware with 5.6 inches of snow recorded at the Wilmington – New Castle County Airport (normal is 6.6 inches). Moderately heavy snow fell in central and southern Delaware on the 13th with up to four inches recorded in much of Kent and Sussex counties.

Data from the Delaware Environmental Observing System (DEOS) show that temperature departures were near or below normal across the entire state (Figure 3). Precipitation departures varied greatly, but were uniformly small (Figure 4), with most stations seeing departures of 1 inch or less. 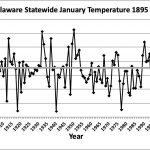 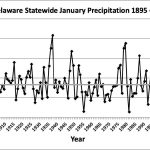 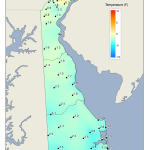 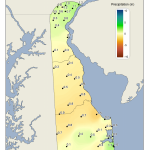 Figure 4. January 2019 precipitation departures (inches) from the 1981-2010 mean based upon DEOS station data. 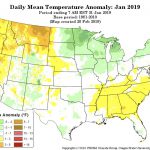 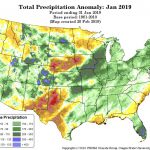