Delaware’s statewide precipitation for February 2019 averaged 3.53 inches, 0.62 inches above the 1981-2010 mean (Figure 2). Like precipitation, snowfall was above normal during the month across northern Delaware with 8.5 inches of snow recorded at the Wilmington – New Castle County Airport (normal is 6.9 inches). Two snowfall events dropped more than 3 inches of snow across the northern half of the State on February 11th and again on the 20th.

Data from the Delaware Environmental Observing System (DEOS) show that temperature departures were above normal across the entire state (Figure 3), while precipitation departures varied depending upon location (Figure 4). Most stations recorded departures of 1 inch or less of liquid precipitation.

Although temperatures were near normal across Delaware, some areas of the U.S. recorded very large temperature anomalies during February. Specifically, the Dakotas and Montana saw extreme cold with temperatures more than 16°F below normal for the month (Figure 5). This was in stark contrast to temperatures up to 10°F above normal over portions of the southeast U.S. The cold temperatures in the northern Great Plains were accompanied by very large positive precipitation departures in the same area, leading to a thick snow cover (Figure 6).
The February temperature pattern across the United States was the result of a strong negative PNA teleconnection pattern that setup across the country during the month. A negative PNA is associated with a trough (southward displacement) in the jet stream in the western U.S. and a ridge (northward displacement) across the eastern portion of the country (Figure 7). 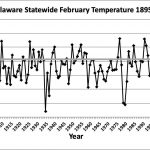 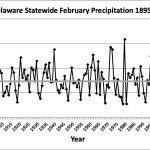 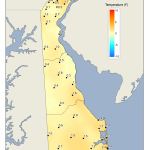 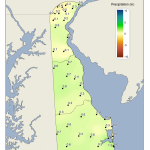 Figure 4. February 2019 precipitation departures (inches) from the 1981-2010 mean based upon DEOS station data. 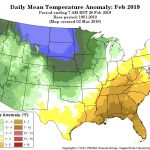 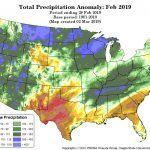 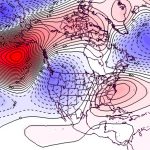