Delaware’s statewide precipitation for March 2019 averaged 3.93 inches, 0.34 inches below the 1981-2010 mean (Figure 2). Snowfall was slightly above normal during the month across northern Delaware with 3.4 inches of snow recorded at the Wilmington – New Castle County Airport (normal is 3.2 inches). Two snowfall events dropped more than an inch of snow across the northern half of the State on March 1st and again on the 3rd.

Most of the United States, except for the southwest, saw negative temperature anomalies during March. Specifically, the Dakotas and Montana saw extreme cold with temperatures up to 10°F below normal for the month (Figure 5). The Great Plains and the interior west were all wetter than normal while the eastern United States generally saw below normal precipitation (Figure 6).
The 500 hPa height pattern for March showed no strong jet stream ridging or troughing over our region (Figure 7). 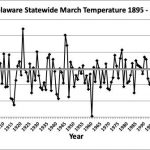 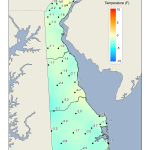 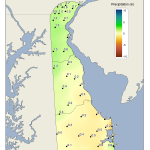 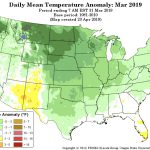 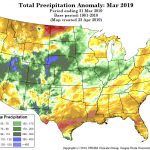 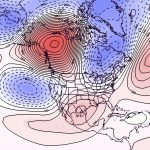