Data from the Delaware Environmental Observing System (DEOS) show that temperature departures were uniformly above normal across the entire state (Figure 3), with some stations seeing anomalies of greater than 3.0°F. Precipitation departures were generally above normal across the state (Figure 4) with the largest positive precipitation anomalies found across northern New Castle County.

The United States saw both positive and negative temperature anomalies during May, with the Southeast, mid-Atlantic and the Pacific Northwest seeing above normal temperatures (Figure 5). Wet conditions were prevalent across the Great Plains, California and parts of the Southwest, while the Southeast was quite dry (Figure 6).

The 500 hPa height pattern for May showed anomalous ridging of the jet stream over our region leading to enhanced southerly flow and higher than normal temperatures (Figure 7). 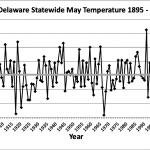 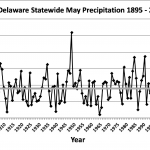 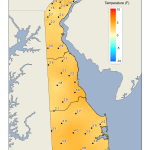 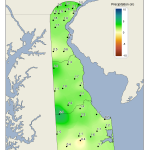 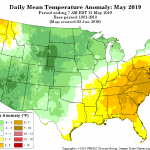 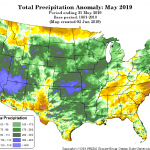 Figure 6. Total Precipitation Anomaly for May 2019 (from the PRISM Climate Group, OSU). 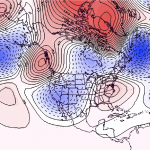