Statewide Spatial Anomalies Data from the Delaware Environmental Observing System (DEOS) show that spring temperature anomalies were above normal across the entire State (Figure 3). Spring precipitation anomalies varied significantly across the state, but were all above normal (Figure 4). Anomalies were greater than three inches at several of the DEOS stations.

National Anomalies Above normal spring temperatures were found across the southern Atlantic coast of the U.S. from Florida through the Mid-Atlantic Region (Figure 5), while colder than normal temperatures were found across the north-central portions of the country. Precipitation varied greatly across the continental United States, with the Mid-Atlantic Region generally seeing above normal values (Figure 6).

Positive 500 hPa height anomalies were present over the Mid-Atlantic Region during the spring season, indicative of anomalous ridging with enhanced flow from the south and moisture transport into our State (Figure 7). This anomalous flow helped to make the season warmer and wetter than normal. 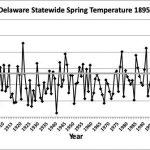 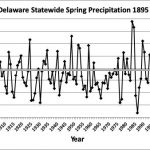 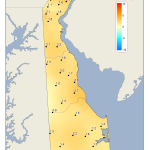 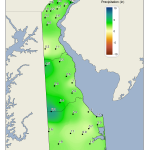 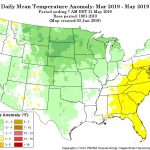 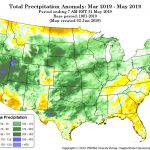 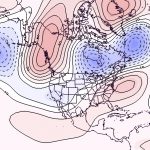