Data from the Delaware Environmental Observing System (DEOS) show that temperature departures were above normal across much of the state (Figure 3), with most stations seeing only small positive or negative temperature anomalies. Precipitation departures were significantly above normal across the northern portions of the State, while several stations across southern Delaware saw precipitation values near normal (Figure 4).

The United States saw both positive and negative temperature anomalies during June, with the Gulf Coast and Pacific Coast experiencing the highest positive anomalies (Figure 5). Cool conditions were the rule across much of the central U.S. and New England. Precipitation across the U.S. varied greatly, with much below normal precipitation falling across the western U.S. and above normal values found in the Ohio Valley Region (Figure 6). The 500 hPa height pattern for June showed weak anomalous troughing of the jet stream over the Central U.S. and New England, contributing to the cool conditions in these locations (Figure 7). No other strong jet stream anomalies were present over the continental U.S. 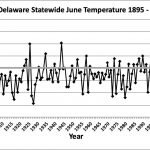 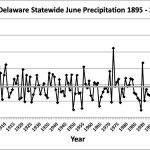 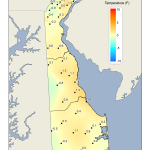 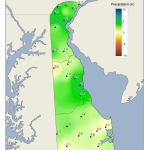 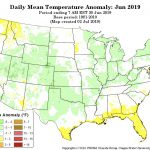 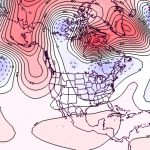 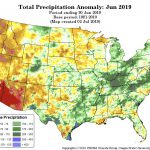