Delaware’s statewide precipitation for August 2019 averaged 3.78 inches, 0.35 inches below the 1981-2010 mean (Figure 2). Delaware’sAugust precipitation was in the middle 0ne-third of values for the last 125 years, putting it into the “normal” range for this month.

Data from the Delaware Environmental Observing System (DEOS) show that temperature departures were above normal throughout most of the State (Figure 3), with the exception of western Kent County. There was a mixture of positive and negative precipitation departures observed across the State (Figure 4). In general, northern New Castle County saw much below normal precipitation, while a few stations in Kent and Sussex Counties actually recorded above normal precipitation amounts. This pattern of precipitation anomalies is a result of the highly localized nature of convective (thunderstorm) rainfall events during the summer months.

The western United States experienced above normal temperatures during August, with below normal temperatures found mainly across the north-central portion of the country (Figure 5). Precipitation anomalies across the U.S. varied greatly, with above normal rainfall across much of the High Plains and below normal precipitation across California and the southwest (Figure 6). The 500 hPa height pattern for August showed a weak anomalous trough over the north-central portion of the Country (Figure 7), bringing the cool temperatures to that region. 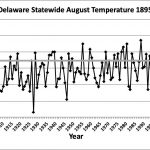 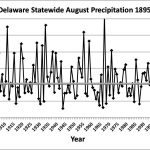 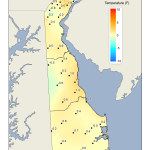 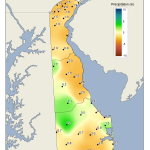 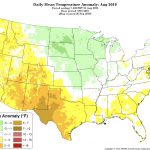 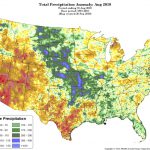 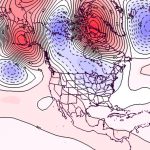