The winter of 2009-2010 was the snowiest in recorded history for many locations across Delaware and southeast Pennsylvania. This year marks the 10th anniversary of this incredible season.

The snowfall season began early with over 17″ of snow falling at the Wilmington Airport on December 19th and 20th, 2009. This storm originated in the Gulf of Mexico and moved northward along the U.S. Atlantic Coast dropping heavy snow from the southern Appalachians, northward along the I95 corridor to New England.

After a relatively quiet month of January, the next significant snowfall for our area occurred on January 30, 2010 when 4.3″ of snow fell at the Wilmington Airport. This storm also originated in the Gulf of Mexico, taking a path along the east coast very similar to the December event. But these first two storms were just harbingers of things yet to come.

The storm often referred to as “Snowmageddon” hit the Delmarva on February 5th and 6th, 2010. This storm also originated in the Gulf of Mexico and moved parallel to the U.S. Atlantic Coast. Snowfall at the Wilmington Airport reached 25.8″, setting the record for a single storm. Snow totals approached 20″ across the majority of the State, and nearly 30″ of snow fell in some isolated locations. But winter wasn’t finished yet.

Just 3 days later on February 9th and 10th, a system moved from the mid-west and redeveloped and intensified off the Delmarva coastline. 12.8” of snow fell at the Wilmington Airport. Although snowfall extended into the southern Delmarva, amounts there were substantially less.

The last significant snowfall of the season occurred on February 25th and 26th, when a nearly stationary low pressure over the mid-Atlantic was able to draw in enough cold air over northern Delaware and southeast Pennsylvania to change rainfall to snow. Upwards of 4” to 5” of snow fell across northern New Castle County, sparing the southern portion of the Delmarva. 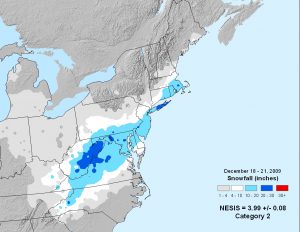 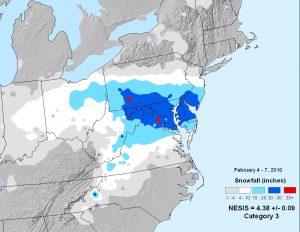 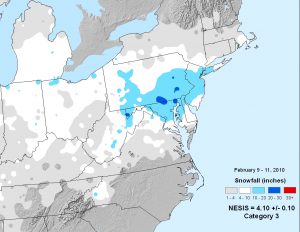 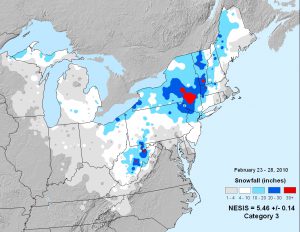