Data from the Delaware Environmental Observing System (DEOS) show that temperature departures were below normal throughout the State (Figure 3), with most stations between 2o and  4o F below the 30-year mean.  Precipitation was above normal at all locations, with the largest positive anomalies of between one and two inches across Kent and New Castle Counties (Figure 4).

Temperatures were below normal across the eastern two-thirds of the U.S., except near the Gulf Coast states. Departures were generally between  1o to 5o F below normal in this area.  Positive temperature anomalies were found across much of the western and southwestern portions of the United States (Figure 5).  Precipitation was generally above normal in the eastern one-third of the United States and below normal across the west, except for large positive anomalies across southern California (Figure 6).  The 500 hPa height pattern for April showed a strong trough dominating the eastern two-thirds of the country (Figure 7) leading to the cooler temperatures across our region. 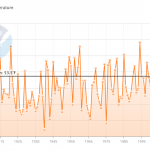 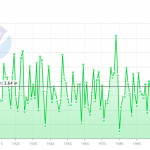 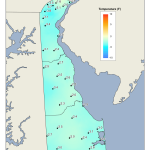 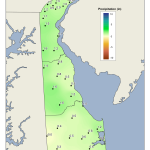 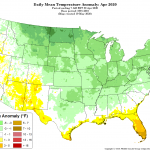 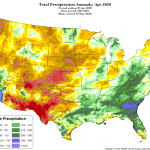 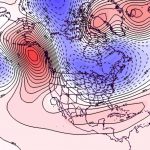