Data from the Delaware Environmental Observing System (DEOS) show that temperature departures were uniformly below normal throughout the State (Figure 3), with most stations between 2° and  4° F below the 30-year mean.  Precipitation was below normal at almost all locations, with negative anomalies of between one and two inches across all three Delaware Counties (Figure 4).

Temperatures were below normal across most of the eastern two-thirds of the U.S.  Departures were generally between 1° to 5° F below normal across this area.  Positive temperature anomalies were found across much of the western and southwestern portions of the United States (Figure 5).  Precipitation varied greatly across the country, with little to no precipitation falling across the southwest while an area of very heavy precipitation was found across the Carolinas.  This area of heavy precipitation was associated with Tropical Storms Arthur and Bertha (Figure 6).  The 500 hPa height pattern for May showed a weak trough dominating the eastern one-half of the country (Figure 7) leading to the cooler temperatures across our region. 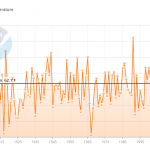 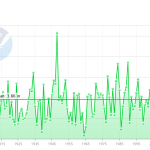 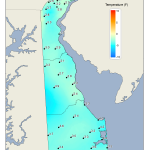 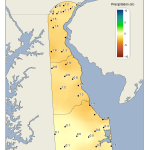 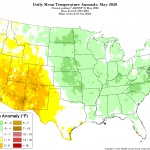 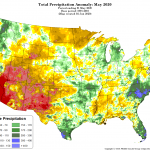 Figure 6. Total Precipitation Anomaly for May 2020 (from the PRISM Climate Group, OSU). 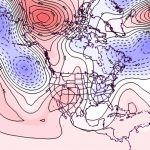