Delaware’s statewide precipitation for August 2020 averaged 7.34 inches, 3.21 inches above the 1981-2010 mean (Figure 2).  The August 2020 precipitation amount was the 17th wettest since 1895, placing this month in the wettest one-third of all Augusts since the start of observations.

Data from the Delaware Environmental Observing System (DEOS) show that temperature departures were above normal throughout the State (Figure 3).  Precipitation anomalies were extreme in several locations with many stations reporting positive anomalies of greater than 7 inches, (Figure 4).  These large precipitation anomalies were primarily the result of Tropical Storm Isaias which crossed Delaware on August 4th and severe thunderstorms which impacted northern Delaware just three days later on August 7th.

Temperatures were above normal across most of the western one-third of the country (up to 10o F) and the Northeast, while below normal temperatures were found across the Great Plains and Midwest (Figure 5).  Precipitation was generally far below normal across the western United States, while much above normal precipitation fell across portions of Arkansas, Louisiana, and the mid-Atlantic Region of the country.   (Figure 6).  The 500 hPa height pattern for August exhibits a ridge dominating the western portion of North America leading to generally warm and dry weather across that region which contributed to the severe wildfire season (Figure 7). 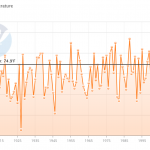 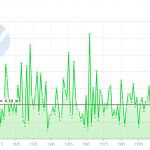 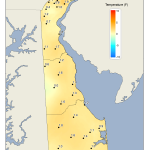 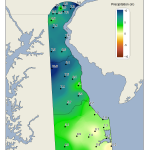 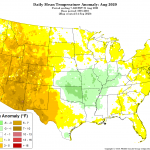 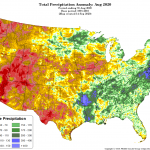 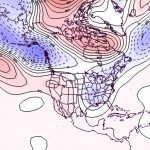