Preliminary data indicates that the statewide average temperature in October was 63.9o F, which is 6.8o F above the 1981-2010 mean value of 57.1o F (Figure 1).  October’s average temperature was the second highest recorded since observations began in 1895.  Only October 2007 has seen a higher mean temperature.

Temperatures were much above normal across the eastern two-thirds of the United States, with the largest positive temperature anomalies found across the Great Lakes and Northeast regions.  Much of the Pacific Coast and the Southwest experienced below normal temperatures during the month (Figure 5).  Precipitation anomalies varied greatly across the country (Figure 6), with excessively heavy precipitation falling in northern California.  The 500 hPa height pattern for October shows a very strong jet stream ridge located over eastern North America contributing to the extreme warmth across that region (Figure 7). 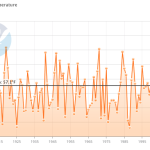 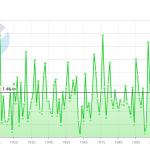 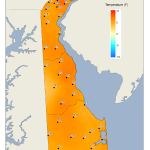 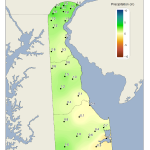 Figure 4. October 2021 precipitation departures (inches) from the 1981-2010 mean based upon DEOS station data. 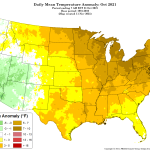 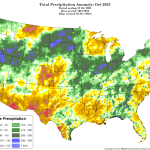 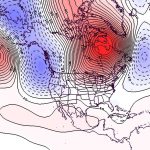