Delaware’s statewide precipitation for February 2022 averaged 2.03 inches, 0.88 inches below the 1991-2020 mean (Figure 2).  This placed this month’s precipitation as the 28th driest February precipitation total since records began in 1895.

Data from the Delaware Environmental Observing System (DEOS) show that temperature departures were uniformly above normal across the entire State, with many stations seeing positive temperature anomalies of greater than 3o F (Figure 3).  Precipitation was below normal across the entire state, with the largest negative departures found across Sussex County (Figure 4).  A snowfall event on February 13th dropped between one and two inches of snow across northern Delaware.

Temperatures were above normal across the Atlantic Coast of the United States, with the largest positive temperature anomalies found across the Carolinas.  The central portions of the country saw much below normal temperatures with some negative departures as much as 10o F across northern Minnesota (Figure 5).  Precipitation anomalies varied greatly across the country (Figure 6), with dry conditions across areas west of the Rocky Mountains.  Wet conditions were found across the Ohio Valley and the Northeast regions.  The 500 hPa height pattern for February shows a strong jet stream trough located over central North America and a strong jet stream ridge over both the eastern and western United States contributing to the temperature extremes across those regions (Figure 7). 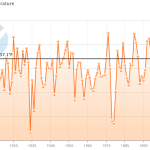 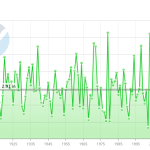 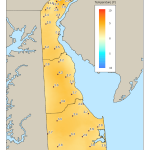 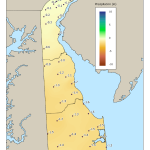 Figure 4. February 2022 precipitation departures (inches) from the 1991-2020 mean based upon DEOS station data. 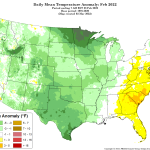 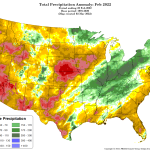 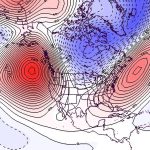