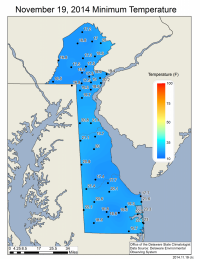 Figure 1. Minimum temperatures for DEOS stations throughout Delaware for November 19, 2014.

The current cold weather pattern we are in is unusual, but not unprecedented. The lowest recorded temperatures in Delaware on this date occurred in 1936 at several locations up and down the state, with Wilmington Porter Reservoir coming in the lowest at 15 degrees on November 19, 1936. Temperatures are expected to remain unseasonably cold for the remainder of the week, with signs of a milder weather pattern coming early next week.