Skip to content
Posted on December 7, 2014 | by Dan Leathers

During November 2104 Delaware’s climate was cool with near normal precipitation.

Preliminary data indicates that the statewide average temperature in November was 44.7°F, 2.9°F below the 1981-2010 normal of 47.6°F (Figure 1) and the third November in a row with below normal temperatures.

All stations across the Delaware Environmental Observing System (DEOS) network experienced lower than normal temperatures during November (Figure 4). Temperature anomalies of greater than -5.0°F were common across much of southern Delaware with smaller negative anomalies found across northern Delaware and Chester County, PA.

Precipitation was homogeneously distributed across the region ranging from over 5 inches in northern Kent County to less than three inches along the Atlantic Coast (Figure 5). 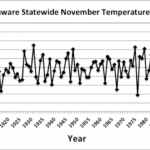 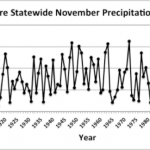 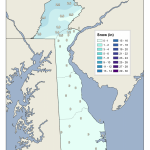 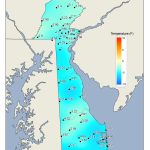 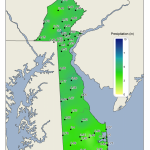