Skip to content
Posted on December 7, 2018 | by Dan Leathers

Preliminary data indicates that the statewide average temperature in November was 46.2°F, which is 1.4°F below the 1981-2010 mean value of 47.6°F (Figure 1). Our cold November followed extreme warmth seen during September and October, making for an abrupt transition into the “winter” season for the First State.

Delaware’s statewide precipitation for November 2018 averaged 7.28 inches, 3.88 inches above the 1981-2010 mean (Figure 2). November 2018 was the wettest since records began in 1895. Moreover, the year-to-date precipitation for the State, through the end of November, is also the highest year-to-date precipitation since 1895. An early season snowfall event brought early school closings and hazardous travel to Delaware on the 15th, when three inches of snow fell across the northern portions of the State.

Data from the Delaware Environmental Observing System (DEOS) show that temperature departures were negative throughout the State (Figure 3), with the largest negative departures found across New Castle County. Heavy precipitation fell across the entire state, with the largest positive precipitation departures seen across northern Delaware, where some reached values of greater than six inches above normal (Figure 4). 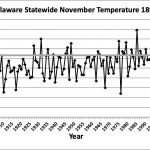 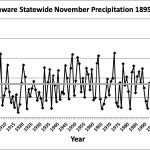 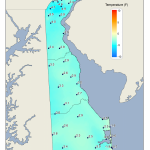 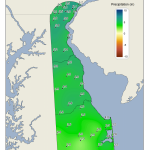 Figure 4. November 2018 precipitation departures (inches) from the 1981-2010 mean based upon DEOS station data.