Data from the Delaware Environmental Observing System (DEOS) show that temperature departures were uniformly below normal throughout the State (Figure 3), with the largest negative anomalies reaching values greater than -6°F. Precipitation was below normal at all stations across the State (Figure 4), with several stations in Kent County recording anomalies of greater than 2” below the long-term mean value.

Temperatures were below normal throughout the eastern portion of the U.S, where some negative anomalies reached greater than 7°F (Figure 5). The western one-third of the U.S. saw above normal temperatures for the month, with parts of the Pacific Coast recording temperatures more than 5°F above normal. Precipitation varied greatly across the U.S. with very dry conditions across the Pacific Northwest and very wet conditions across the southwestern portion of the country (Figure 6). The 500 hPa height pattern for November showed a strong trough dominating the eastern U.S. (Figure 7), bringing the cold and dry conditions to our region. 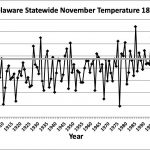 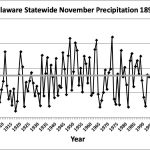 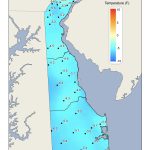 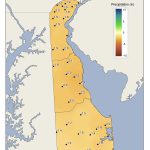 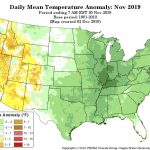 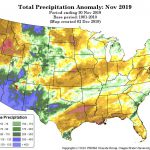 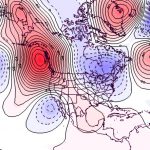